5 Secrets To Why Chocolate Affects Your Mood 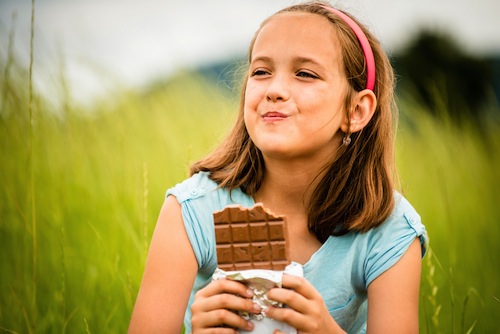 Despite chocolate often being classified as a candy, sweet or treat, the delicious food is also thought to have several health benefits. For instance, when consumed in moderation, chocolate is good for the heart. That’s because chocolate increases the responsiveness of blood vessels and increases glucose tolerance, both of which are key factors in preventing heart disease. Another benefit is that chocolate has anti-oxidant properties, which is key in preventing cancer.

But aside from benefiting the body in a physical manner, chocolate has also proven to affect the emotions – as in your mood. In fact, many report feeling good and positive after indulging in a chocolaty treat. Here’s a look at 5 secrets as to why chocolate affects your mood:

It’s no secret that milk chocolate has a high concentration of carbohydrates. But what you may not realize is that carbohydrates work to create feelings of happiness. That’s because carbohydrates increase the rate at which tryptophan, an amino acid, enters the brain. This thereby increases the levels of serotonin in the brain, which in turn helps create positive moods. Serotonin is a neurotransmitter that plays a big role in regulating moods.

You may not have ever realized it, but there are more than 350 natural chemicals in chocolate. One of the most significant – at least as it pertains to affecting one’s mood – is phenylethylamine. Phenylethylamine causes your blood sugar and blood pressure to rise, which typically helps lead to temporary feelings of heightened awareness and well-being. In other words, it’s phenylethylamine that can largely be credited for your emotional high experienced after consuming chocolate.

It’s estimated that just one ounce of chocolate contains about 20 milligrams of caffeine. While caffeine does have some negative side effects associated with it, it also helps people feel more alert and awake for periods of time.

It’s said that women crave chocolate more than men, and there’s a good reason as to why – chocolate is rich in magnesium, which is something that women usually lack in post-menstrual periods. Hence, chocolate is often viewed as a comfort food in this case, as it can boost the spirits and elevate the mood during these emotionally trying times for those of the female gender.

Don’t you feel good when you have a tasty meal to look forward to, or have just polished off a tasty treat? Yeah, we do too. That’s likely part of chocolate’s mood-altering aura as well, as it’s only natural to feel good after you’ve consumed something delicious.

So there you have it. Chocolate … not only delicious, but good for the body and the mind. As you can see, chocolate affects mood in a variety of different ways beyond just being an overall tasty treat. So eat chocolate and be happy!